Home » Catalog » Above and Beyond 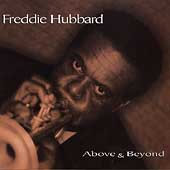 This Freddie Hubbard 1982 recording catches the trumpeter on one exceptionally daring night of pure steam at the Keystone Korner in San Francisco. It also has very personal echoes that reach back through the history of the music in which Hubbard has stated a serious claim as one of the immortals.

On "Above and Beyond" Hubbard remakes the big sound, intricacy, high notes, screams, tongue flitters, and lip trills that is totally informed by all that had arrived in jazz since the early days when the instrument was redefined by jazz musicians.

This recording is about how real fire feels, sounds, and stretches the soul.

"This is my best playing on record." - Freddie Hubbard

Born in 1938, Hubbard learned the trumpet not by studying the history of jazz, but by playing and playing. He absorbed all of the

things that were in the air by the late 1950's and that were available to a curious young man who arrived after so much of horn had already been played by Louis Armstrong, Roy Eldridge, Dizzy Gillespie, Fats Navarro, and Clifford Brown, each achieving a synthesis of high musical imagination.

Despite this by 1960, Hubbard, along with Booker Little and Don Cherry was one of the three most talented trumpeters of his generation. He stood on bandstands or recorded with the geniuses and innovators of that time - Sonny Rollins, John Coltrane, and Ornette Coleman.

It is this experimental approach to the music that shines through on "Above and Beyond".