Home » Catalog » The Path to Infinity 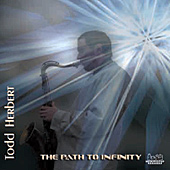 "Herbert can part the waters of on arrangement wfth energetic technique and tireless drive. But he also has a reserved tone that honors the cool school of the 50's as much as the mainstream of the 8O'S, and in combination with his flying fingers, it produces a gentle creative tension In his playing."

When a jazz icon like the great Freddie Hubbard calls a record company about an artist, the producer listens! In August of 2006 that is just what happened as producer Stan Chovnick received a phone call from the jazz legend Freddie Hubbard who was singing the praises of New York based tenor saxophonist Todd Herbert. After hearing him play, Stan agreed that Todd is an exceptional player who definitely deserves to be heard. Todd, who originally hails from Chicago, got his first break with the Charles Earland Quartet and later toured with Freddie Hubbard's quintet. On 'The Path to Infinity" Todd performs with a stellar ensemble of players who sail through his intense compositions (and one Sonny Rollins cover tune) with fire and excitement that is very refreshing to hear in 2007.

2 - The Path to Infinity

The Eternal Void
The Path to Infinity