Home » Catalog » The Tree of Life 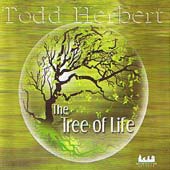 Most of the best jazz musicians have one foot in the past and one in the future, mastering the jazz tradition and then moving the music ahead through their vision, energy and creativity. Dizzy Gillespie built on the inspiration of Roy Eldridge, Charlie Parker greatly extended the ideas of Lester Young, and Herbie Hancock originally learned from Bill Evans’ example. Todd Herbert, a brilliant young tenor-saxophonist, takes John Coltrane as a point of departure in presenting his own original music.

“I certainly remember the first time I heard John Coltrane,” says Todd Herbert. “I played clarinet for a year when I was nine but soon decided that the saxophone was a better fit for me, so I switched to alto. I listened to Charlie Parker and a lot of bebop, but Coltrane was something else. My saxophone teacher played Live At Birdland for me when I was about 13 or 14. It blew my mind, and changed my life.” Born in Evanston, Illinois, Herbert attended the University of Miami where he switched permanently to tenor. “I had a great teacher, Gary Campbell, who really helped me out a great deal.”

Returning to the Chicago area after he graduated with a bachelors degree in Jazz Studies, Herbert almost immediately landed a job with organist Charles Earland. After spending two years playing regularly and touring the world with Earland, he worked with Freddie Hubbard. “Playing with Freddie Hubbard was the best experience of my life. In my opinion, he was the greatest who has ever played a trumpet and one of the greatest jazz musicians of all time. I felt lucky to get to play with him. We had some great times together.” Since moving to New York, Herbert has worked with veteran drummer Jimmy Cobb and Hubbard but mostly led his own groups, performing at such clubs as Smalls, the Iridium, Fat Cat’s and Minton’s. His first CD, The Path To Infinity, was released by Metropolitan in the summer of 2007.

The Tree Of Life matches Todd Herbert with a very impressive rhythm section. He has known pianist Anthony Wonsey the longest since they are both from the Chicago area. “I’ve always been very impressed by his playing and I always liked the way he accompanies other soloists too. Dwayne Burno, who is on my previous record, I’ve known for ten years. He is such a strong bass player, has great time and has a very good sound. I’ve been playing with drummer Jason Brown for five years. In addition to his excellent time and sound, he is a fine soloist and accompanist.” The musical magic between the musicians, which is pretty obvious when listening to the performances on The Tree Of Life, resulted in the project coming together very fast. The quartet had a rehearsal a few days before and then recorded all seven of the saxophonist’s originals in one session.

The Todd Herbert originals all have their strong moments. The opening “Look Into The Abyss” is a driving piece in a minor key that serves as a perfect introduction to the musicians and sounds as if it could have been a standard from 1961. Herbert rips into the chord changes with authority and passion, expertly building up his solo. Wonsey creates a fluent improvisation that is a little reminiscent of early McCoy Tyner, Burno pushes the ensembles while keeping the music swinging hard, and Brown takes a brief but effective spot. “Maharishi” is a lyrical piece with a Latin feel which, as with many of these originals, features original chord changes rather than sequences “borrowed” from earlier standards. Herbert’s takes a particularly thoughtful solo. “Do This” is an uptempo cooker with plenty of fire that finds the musicians inspired by the fresh chord structures.

“I’m Down” gives the quartet an opportunity to dig into a medium-tempo blues; Wonsey is especially creative on this piece. “The Tree Of Life” has the rhythm section answering the saxophonist’s melody statement before the band romps through the solo sections. Herbert displays his mastery of “sheets of sound” improvising. “Years Of Dreaming” is the tenor’s first original ballad and it features him at his most wistful, hinting a bit at Charles Lloyd. The closing “Herbs Of Healing” is quite rapid and has complex chord changes, making it one of the most technically challenging pieces on the set, particularly at this tempo. But Todd Herbert, Anthony Wonsey, Dwayne Burno and Jason Brown make it all sound effortless.

When asked to comment on the CD as a whole, Todd Herbert says, “This is the kind of no-holds-barred jazz that I love to play. We just went into the studio and played. I can’t say enough about how great the rhythm section was. I didn’t have to worry about a thing. Recording with this rhythm section and getting to play this music is what I live for.”

And The Tree Of Life is the type of recording that straightahead jazz fans love and savor.

Scott Yanow, author of ten jazz books including The Jazz Singers, Jazz On Film and Jazz On Record 1917-76.

Maharishi
The Tree of Life